Castiglione della Pescaia is an ancient village on the sea, between Punta Ala and Grosseto Marina. The ancient part is like a balcony on the Tyrrhenian. It is the home of a tourist port that offers daily trips to the islands of the Tuscan archipelago. Castiglione della Pescaia boasts ancient origins: the first traces of inhabitants in this area go back about sixty thousand years. While the first settlement was at Vetulonia, the very old town that the Etruscans built on the shores of lake Prile (which no longer exists). The Romans were based, however, in the village of Salebrone. This was well-known for its moderate climate, lake Pescoso and its surroundings rich in game. After the fall of the Roman empire and the Barbarian raids, in 962 Castiglione succumbed to Pisa, which was ruled by Otto 1st of Saxony, emperor of Germany. Pisa exploited its riches and didn’t take care of the port shelving or the waters of the lake Prile, which were stagnating & were the cause of increasing malaria epidemics.

To get to the Nature Reserve follow the signs for the island of Clodia and for the Casa Rosa (Red House). The setting is very evocative and rich in birds. Inside the park (entrance is free) you can admirewhite herons, red herons, ducks, the hawk of Padule and the ‘Knight of Italy’. 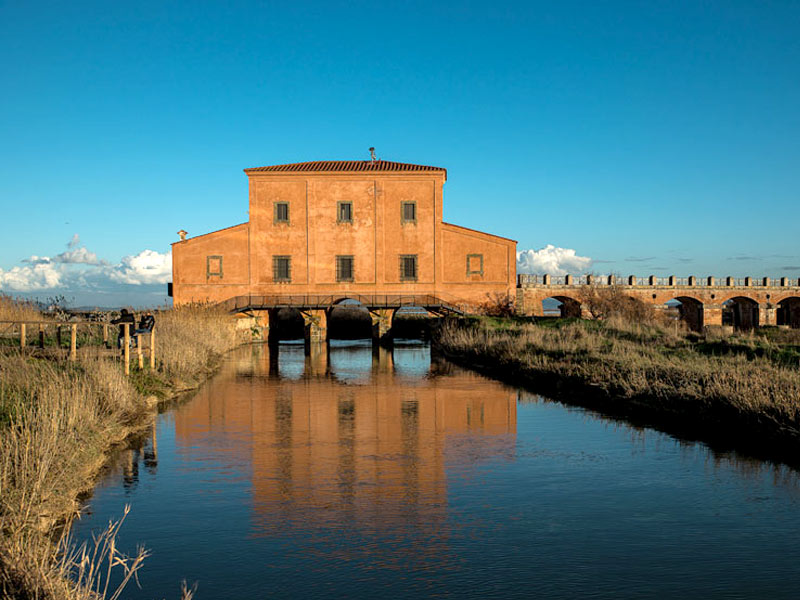 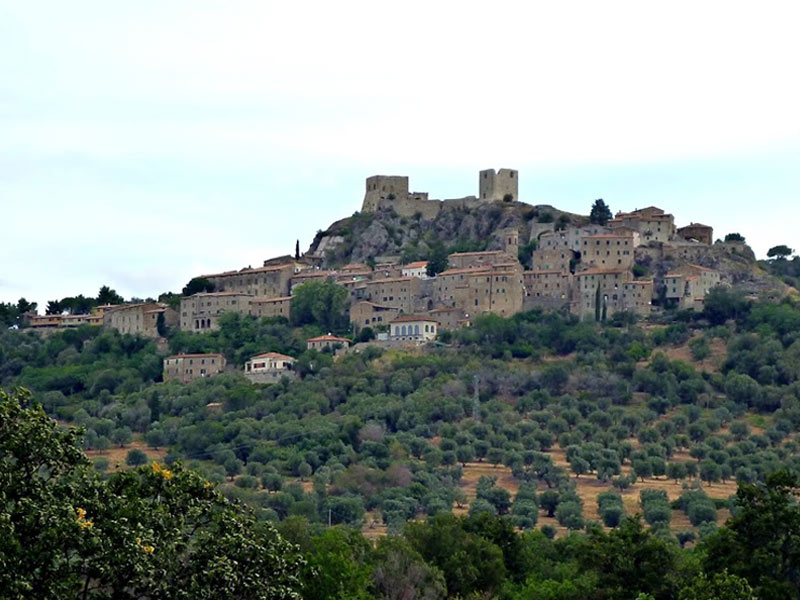 Vetulonia is a very old Etruscan town that gave Rome the symbols of fasces and of the axe. Vetulonia reached its height of finery between the VII and VI centuries. B.C. and still retains many memories of its historic power. After the magnificence of the Etruscan period Vetulonia faded until, in 1181 the Castle of Colonna arose, been born out of the necessity for fortifications to defend the population. Some traces of the imposing Etruscan city wall remain, and in the immediate surroundings you can find Etruscan necropolis.
Amongst the tombs that you can visit, are the notable ‘Tomb of Diavolino’ and the ‘Tomb of Petrera’, which you can find on the road to Buriano. In the countryside you can visit an archaeological museum, which is opening shortly, with artefacts of considerable value, as soon as the restoration is finished. You can admire the splendid panorama of the undulating hills.

Tirli is nestled between ilexes (Holm Oak) and chestnuts and enjoys an exceptional climate, sitting at 450 metres above sea level enjoying the sea breeze. The first settlements were made by woodsmen and shepherds & the tradition of woodcutting is still deeply rooted in the locals. Known for its alleyways, the village is dominated by a monastic fortress, built around 1500 by the Augustine friars. The local people would have taken refuge here to escape to the assaults of the Saracen pirates. 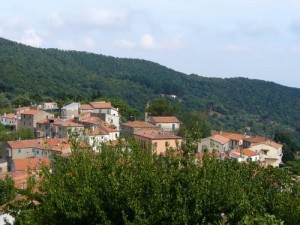 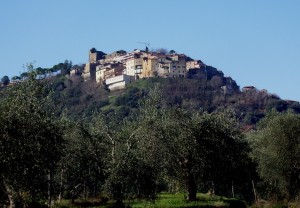 This town is dominated by a castle of ancient origins, perhaps Roman, according to other Lombard sources. It attained its zenith in the first three centuries of this millennium. The romanica church retains its bell tower and houses a relic of San Guglielmo that can be found sheltering in the “Romitorio”. On the second Sunday after Easter, San Guglielmo is celebrated with a beautiful procession that leaves from Buriano and heads across the scrub until it reaches the Romitorio. On these occasions the ‘pianeta’ (woven embroidered in gold and donated by the grand duchess of Tuscany, Maria Antonietta, in memory of her fall from her horse) is carried, from the “La Badiola” farm

It is an ancient small town, situated 380 metres up on a hill about 15 Km from the Gulf of the Sun (Golfo del Sole). It was noted for its copper and silver mines, used until 1300 & then reopened in 1830 until 1970. It has preserved its medieval appearance. The ‘Balestro of the Girfalcon’, a competition between the archers of the different districts of the Town, is also a historic tradition.

Is a fortified city on the road between Rome and Pisa. In 1138 it became the most important Bishop’s seat in Maremma. Later it went to the Aldobrandeschi, then it was conquered by the Siennese and in 1559 it passed to the Medici. It has been subject to varied enhancements for at least two centuries

San Galgano is made up of the Retreat or ‘Rotonda of Montesiepi’ and from the ruins of the large Abbey of Circestense of San Galgano. It is one of the most thought provoking places you can find in Tuscany. In the Rotonda of Montesiepi you can find, driven into the rock, the Sword of San Galgano. Built between 1182 and 1185, above the hut on the hill where San Galgano spent the last year of his life and where he actually drove the Sword into the rock. The Rotonda of Montesiepi was at first the Grave of the Saint, who was buried to the north of the sword, across the entrance door. Only in 1220 (or 1218?) was the construction of the large downstream Abbey started. The intense construction lasted until 1268, when it was officially consecrated by the Bishop of Volterra, Alberto Solari.
Then hundreds of years of splendour ended in 1364 & then a steady decline followed due to the poor practices of the Commenda. In fact, in 1550 the Commendatory Girolamo Calves sold (after the jewellery and who knows what else) the lead roof. However, some attempts were made to restore the cloister at the end of 1789.
After the Rotonda of Montesiepi was elevated to Pieve, the large abbey was deconsecrated and left to run to ruin. Meanwhile the story of Rotonda of Montesiepi continued, with its ‘Sword in the Stone’ & the legend of King Arthur. The large Abbey retains, along with its Sacred Geometry, other surprises such as it is “musical” and is “ancient Egyptian”. Perhaps the capable Circestensi monks of San Roberto of Molesme and of San Bernardo of Chiaravalle knew much more than they left us in writing. 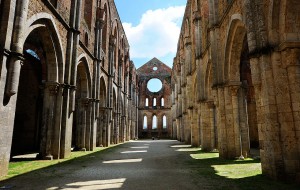 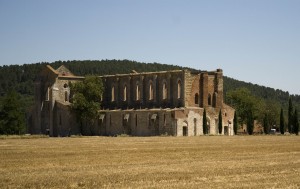 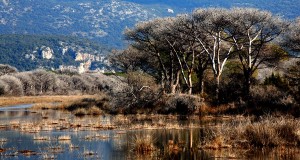 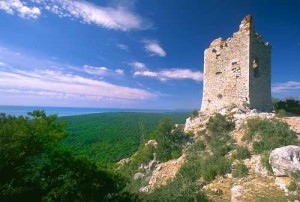 The Nature Park of Maremma was founded in 1975 and despite its small size (about 10,000 hectares) and young age, it has in a brief period of time become a point of reference for an increasing number of people. In 1993 it was honoured with the European Park Diploma by the European Council. A visit to the Park will surely be a pleasant and informative experience, but be aware that a single visit may, in some cases prove disappointing as there is so much to see in such a short time. We must also remember that it isn’t a zoo, the animals are free and wild.
You can only visit the Park on foot. There are two approaches: via Alberese or via Talamone. For excursions that leave from Alberese, where a short tour is given, admission is usually on Wednesdays, Saturdays, Sundays and public holidays. However, for specific information on schedules and details of trips we recommend you contact the Park Visitor Centre. 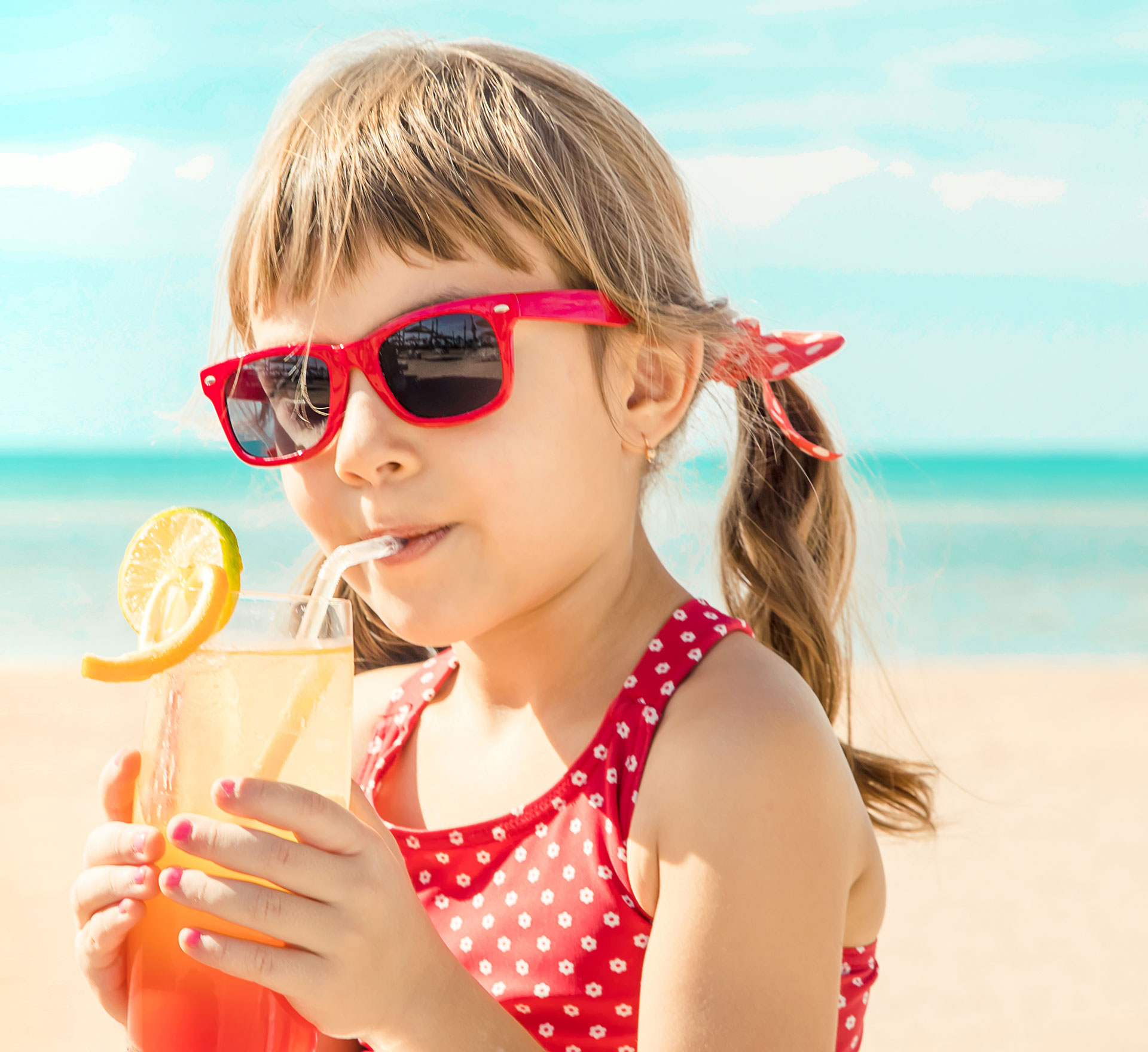